BEAST/B2ST holds its first fanmeeting in the Philippines

Dongwoon held my hand, waved and flashed the heart sign at me. And signed my CD, of course.

They held the fanmeet the same day that they arrived at the airport. Kikwang wasn't there :( I asked a coordi noona and she said that he will be late, will follow tomorrow (Thursday).

BEAST is here in Manila to do promotions and will be holding a concert with Kim Hyun Joong of SS501 in Araneta Coliseum on Saturday, June 19.

Basically, I was in front so they could hear me when I shouted something out.
Call me Heart Requester of the day-- I convinced Dongwoon and Doojoon to flash heart signs at me.

ME: Dongwoon-ah! ~I do the heart sign~ (Do you know how hard it is to flash the heart sign while holding a camera?)
DONGWOON: *laughs in a I'm-too-cool-for-heart-signs way* *hesitates for a second* *does the heart sign anyway*

He held it for five seconds till I got pictures and said thank you. :)
(DONGWOON = KOREAN ZAC EFRON = KEFRON. Do not deny.)
Same went for Doojoon, but he was more hyper and more game to do anything you asked him to. What a trooper. He was lipsynching and dancing in his seat the whole time.

I was one of the first 20 people to have their CD signed. The boys were in a good mood, still not so tired, so they said hello & mabuhay to each of us.

Doojoon pointed at my rings and said: 'Cute'.
THAT WAS MY CUE TO SMILE LIKE A WACKO. I was speechless. Fail. 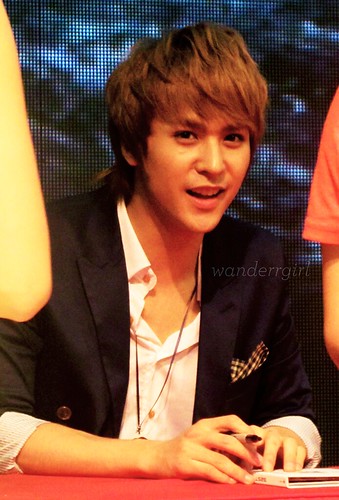 I got to shake Dongwoon's hand again before they walked off the stage. (And Yoseob's before that) It pays to be aggressive, you guys. I basically shoved my hand in front of him despite the indignant heavyweight bouncer beside me.
More pictures and a Dongwoon fancam tomorrow, please watch out for it! As for now, I'm beat. Good night!
Credits: WanderrGirl (http://twitter.com/arriane_)
PLEASE COMMENT/CREDIT IF TAKING OUT! THANK YOU!
Tags: fan meeting, highlight
Subscribe
Previous
← Ctrl ← Alt
Next
Ctrl → Alt →
Previous
← Ctrl ← Alt
Next
Ctrl → Alt →