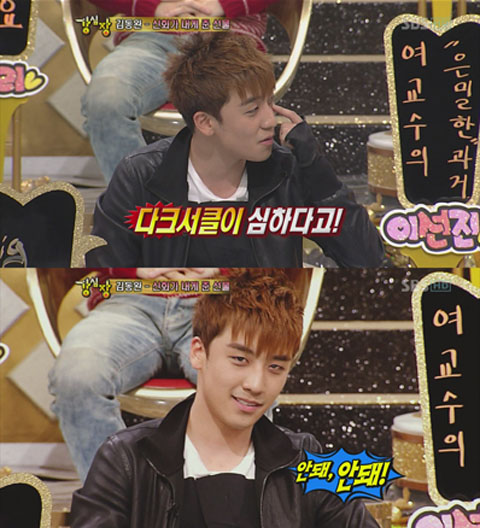 Big Bang’s Seungri shared a woeful story of how he failed to get rid of his dark circles.

The February 22nd broadcast of SBS’s “Strong Heart” gathered some of Korea’s story-telling terminators, who all showcased their voluble wit.

As Seungri listened to Kim Dong Wan’s story about a time when SM Entertainment’s chairman, Lee Soo Man, ‘gifted’ him with a nose job, he was inspired to respond with his own plastic surgery tale.

Seungri confessed, “My agency wanted to give me a present, too. Because my dark circles are really severe, we went to a plastic surgeon, but the doctor said we couldn’t fix it.”

He added, “The cause of dark circles lies in the liver, sinus, and eyes – there is a total of three causes, but I have problems in all three areas.” In the end, after he received the diagnosis that his dark circles were incurable, he sadly went back home.