JYJ's concert in Indonesia is canceled; promoter in Singapore is rejected; another promoter butts in

C-JeS announced that JYJ’s World Tour Indonesia Concert (which is scheduled on 09 April 2011) has been cancelled.

Hello, this is C-JeS Entertainment.

On the 26th, C-Jes Entertainment formally informed the Indonesia promoter our decision to cancel. We have continuously warned the Indonesian promoter of their continued failure to abide by the contract and their consequent failure to establish trust, and because the promoter failed to correct themselves even after [the warnings], we have unfortunately and without a choice decided to cancel since they would be unable to hold the concert smoothly.

We tried our best to not cancel because of the numerous fans waiting in the area, but after considering the dangerous possibility of there being damage to JYJ’s image, we have regrettably made our final decision to cancel.

Furthermore, in regards to the Singapore concert, because we are in the process of changing the original promoter and consulting with the people in the area, please wait for the final confirmation from C-JeS entertainment.

The ONLY country canceled in JYJ’s World Tour is Indonesia, and we will give further notice about changes and additions to areas holding the World Tour. 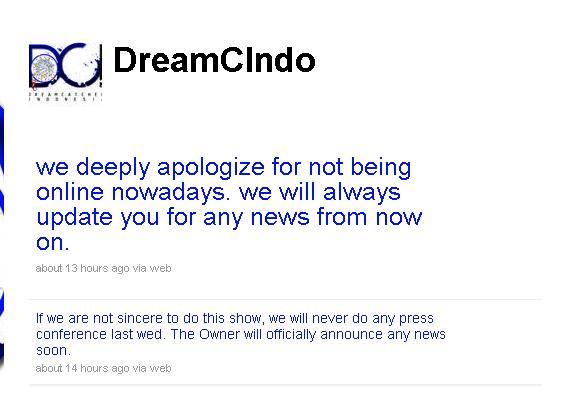 
Faith & D Entertainment (promoter for JYJ's concert in Singapore) announced that the concert (which is scheduled on 23 April 2011) has been cancelled.

This is an official announcement to inform everyone that we have just been notified by CJes Entertainment, the artiste agency of JYJ that they have decided to cancel JYJ World Tour Concert in Singapore which is scheduled on 23 April 2011 at Singapore Indoor Stadium.

It is with utmost regret that we have to accept this cancellation notice from the artiste agency at this point in time.  We have submitted the final plans for stage, seating and ticketing for the agency’s approval so as to proceed with the official announcement on ticket sale. These plans are in accordance with the regulations required by the authorities in Singapore and the budget allocated for the concert. It is most unfortunate that the plans are not approved by CJes and their decision is to cancel the concert.  We respect the agency’s decision and, with great regret, we are unable to change their mind but to accept this unforeseen circumstance that is beyond our control.

We understand the disappointment as well as the inconvenience caused due to the cancellation and we sincerely apologize – especially to the fans of JYJ. 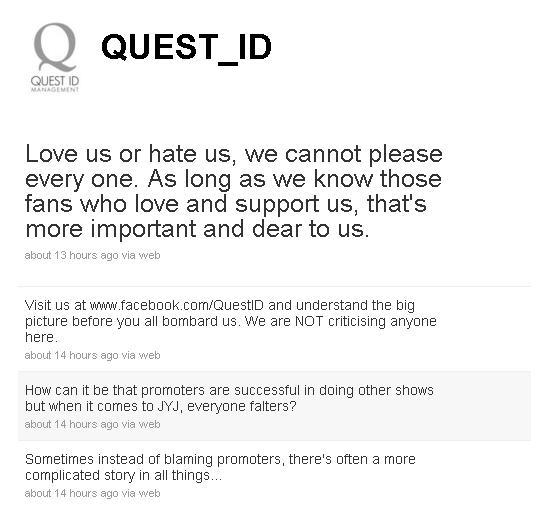