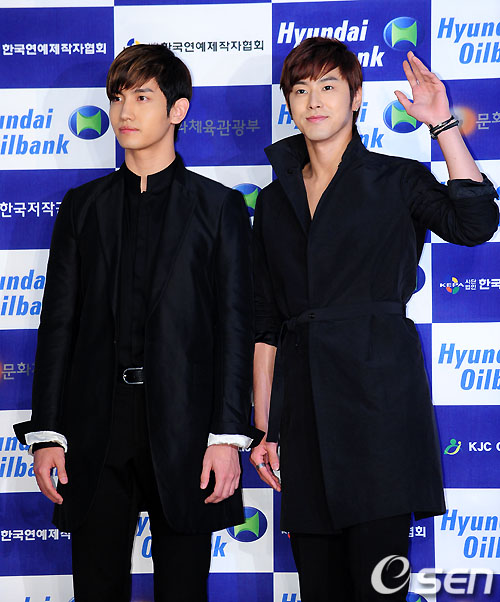 Although they may have decreased in number, their fame and popularity have not waned. 2-member group TVXQ put on a concert for 45,000 of their fans at the Kyocera Dome in Osaka on April 23rd. This was their final performance of their Japanese Tour that began this past January. Their 26 performance tour covered 9 cities in Japan including Yokohama, Fukuoka, Tokyo, Osaka, Nagoya, and more.

This tour was the very first independent concert for TVXQ in Japan, after three members left to create JYJ in 2010, leaving just Changmin and Yunho remaining.

TVXQ’s agency SM Entertainment remarked, “550,000 fans in total were present at all 26 performances, which is the largest crowd drawn in by a Korean artist in both Korea and overseas for a concert tour. The sales total for the tour if you combine ticket sales, merchandise, and more is estimated to be around $90,000,000 USD.”

As soon as the performance began, the audience members began waving their glow sticks in the air. TVXQ performed 20 songs in total at the event, beginning with “Rising Sun” which they released in 2006, “B.U.T“, “Superstar“, and more. Yunho even emulated the mannerisms of a popular Japanese comedian, evoking laughter from the numerous Japanese fans in the stands.

Thousands of fans began waiting outside the Kyocera Dome before the doors opened, and one fan remarked, “They are good looking and buff… I can’t even list all the reasons why I like TVXQ.”

There were also some older female fans that were in their 50′s and 60′s. A 62-year old fan from Yamaguchi, Japan said, “TVXQ is loved by fans of all ages, not just by the young people.”

The audience members stood on their feet for the entire 3-hour performance. Whenever the intro to a ballad song began playing, fans from each corner of the venue would shout “I Love You!” in hopes to be heard by the boys, and when they performed their encore song “Somebody to Love“, all 45,000 fans seemed to sing along with the lyrics.

“I’m so happy I got to see Yunho in person,” another fan remarked. “They had a Fukuoka concert in February, but I’m so glad I came to see them again.”