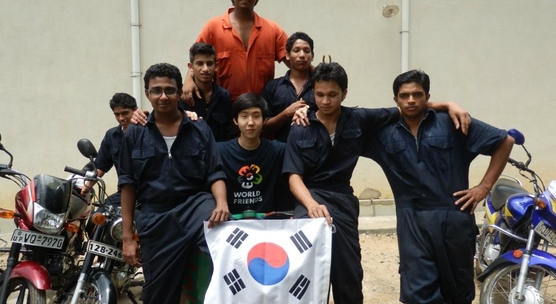 Recently a Korean citizen who was serving in Sri Lanka as a volunteer as part of KOICA (Korea International Cooperation Agency) in place of his military service passed away away on the 16th. Although he was undergoing service the Korean government refuse to give him a proper burial and therefore his brother has put together this petition for him.

First of all let me explain what has been happening to us. Unfortunately, my brother KIM YOUNG WOO was struck by lightning on the 6th October 2012, at approximately 5.30pm in Sri Lanka. He and another girl passed away immediately while 3 others had survived the strike. You may be wondering what was he doing in Sri Lanka, please allow me to enlighten you. He was in an organization called KOICA (Korea International Cooperation Agency), serving as a volunteer to replace his military service (South Korea has mandatory military service of 21 months) since March 2011. He was teaching automotive engineering to Technical College students in Bandarawela, Sri Lanka. He was so excited to have been selected as a member of KOICA as he had to go through rigorous interviews and tests. He was required to serve the country for about 30 months in Sri Lanka, instead of the regular 21 months for normal military service. Before heading to Sri Lanka, he was trained on how to educate others and he also had to pick up Sri Lankan languages. He was supposed to be in Sri Lanka until September 2013, but did not manage to complete his service. I believe that his accomplishments in the time that he was in Sri Lanka should not be overlooked. Even a minister in Sri Lanka had praised him because he contributed a lot to raise the quality of education of those Technical College students. We were told that if he served 30 months teaching automotive engineering in Sri Lanka under KOICA, he did not have to serve as a soldier anymore as they perceived his work worthy of replacing the military service. My family agreed to send him abroad in order for him to fulfill his desire to devote himself to others in need.

How can the Korean Government think that money is enough to compensate our loss? My brother’s untimely demise has affected not only our family, but dear friends as well, to some extent, strangers. The Korean Government mentioned that it would be tough to put him under the National Memorial Board because he was not serving in the army. Under any circumstances that a soldier passes away during his time in the military service, he would be on the National Memorial Board. My brother died just the same as any other soldier, serving his country. Although he may not have been a soldier in the army, he was always a soldier in my eyes; he was always fighting for the greater good. I cannot fathom why my brother will not be put under the National Memorial Board. They are treating him as if he is just another object. The government disregards the truth that he deserves to be buried with honor just because he was under an army substitution agency instead of the regular army service.

I still strongly believe that the government will be able to ease my brother’s passing by allowing him to be on the National Memorial Board because he didn’t die in vain. There were five KOICA members involved in this incident; two died, three are in the hospital. The government is restricting the reports of these facts to the public. At first, reports said that they would compensate all the families involved in this tragedy. But now, there is not a single action about these compensations. It is as if the government and KOICA are controlling the press reports. As a Korean citizen, I really wish my brother could regain his honor and be put in a highly respected place, because that’s what he deserves; to be respected even after leaving the face of this earth.

Alone, I am not able to fight this war. Even with my parents and relatives, it is not enough. Dear friends, whether you know me inside out, or if you haven’t even seen my face before, there is one thing that I ask of you. I ask of you to support my family and I to be given the chance to put my brother in Korea’s national cemetery. I hope you can sympathize with me, the lost of mybrother, the loss of a son.Please share this news around as far as you can, and help sign our petition.

I understand that this may be an unconventional post but in my opinion this is an important petition not only for his family but also in making the government understand that, yes, while he may not have been participating in the standard service, he was still serving his country and therefore deserves to be recognised and respected.